I Can Be a Clay Snapper 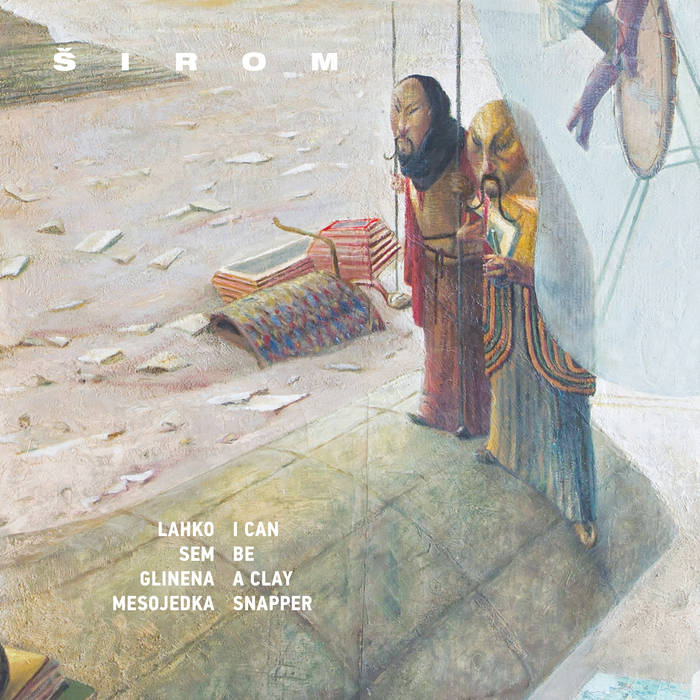 Lost Tribe Sound For people who love music that borrows from so many cultures that it becomes impossible to track its origin. ŠIROM keep everything on the right side of cool. It would be a shame to lump this in with other world music that doesn't have this advanced level of respect and subtly involved. Favorite track: Boats, Biding, Beware!.

Slovenia’s miniature, but incredibly diverse landscapes, echo through its distinctive cultural, historic and linguistic traits. When thinking about Širom’s geographical trajectories, as well as their musical ebb and flow, one has to consider the abundance of water that can be found in the individual regions where they come from. Cascading mountain stream lilt, lazy lowland river meandering and the mysteriously vanishing waters of Karst are most certainly inscribed into Samo Kutin’s, Iztok Koren’s and Ana Kravanja’s childhood memories and subsequently, their remarkable musical art.

“In the process of making the second album we decided to shoot a film,” Samo Kutin explains. “The idea was to visit the places we come from, the ones that are more difficult to access, to see how environment in which we grew up in and the memories it awakes, affect our musical improvisation. The film called Memoryscapes is a kind of a document of this experiment, but the experiment itself certainly influenced the creation of the second album.”

Watching the trio experiment and jam on ribab, frame drums, balafons, percussions and various other unusual or homemade instruments in the sinkhole Bukovnik in Karst, on the snowy mountain top of Kal above the village Čadrg and in bright yellow turnip rape fields in Prekmurje, the soundscapes they create symbolically depict the essence of Širom. The search for idiosyncratic sound where no one else is looking. A passion for exploring diverse sonic qualities as well as examining the constantly changing relations between the material (everything that produces sound), the environment, human experience and musical intervention.

But the journey towards I Can Be a Clay Snapper began with a rather different chord. Before plunging into improvisational and complex compositional musical waters, Ana and Samo cite punk rock as the starting point of their music ventures. While Ana was busy playing bass guitar in a punk band in Ljubljana, Samo, along with his twin brother Jani, formed numerous local line-ups including the punkish Štrudls; the more acoustic Migowc and Čarangi; while eventually morphing into the experimental collective Salamandra Salamandra, which still enjoys a somewhat legendary status amongst Slovenian music aficionados.

“As a schoolboy I experienced a strange feeling of shame when listening to music, so I just didn’t. Later, when I indulged myself in music, I realized that this was because it was a very powerful medium for me,” admits Iztok, who cut his teeth in noise, metal and post rock bands such as ŠKM Banda and Hexenbrutal.

Iztok lent an ear, liked what he heard and invited Najoua to join his band on a European tour, during which time they decided that the three of them should collaborate. But at the beginning it was not a smooth ride, as Samo recalls: “It was not easy to create music that would satisfy all three of us, but that’s kind of crucial, since it is this intersection of different personalities that created Širom. It is through conflict that new ideas emerge.”

The band’s emergent sound oscillates between a wide array of acoustic folk sounds and contemporary post rock meditations, often drifting from improvisation to structured composition and then back. It is described by the members themselves as imaginary folk or folk from a parallel universe. “Our music creates emotional landscapes. When I was still painting every day (Ana holds a degree in painting) I was trying to paint my dreams but that didn’t work out,” Ana remembers. “I discovered that by using an abstract image I can draw nearer to what I felt in my dreams. Our music is based on a similar principle.”

According to Samo, the guiding concepts of their music-making are: “To play on acoustic instruments, to work with repetition and a common sound. Each of us can play a simple thing, but the overall result is that a complex thing comes to life. The quality of sound depends on the combination of the instruments and that’s why we modify and prepare instruments or create our own.”

As an avid sound-seeker, Samo began to develop an interest in building instruments out of everyday objects like drawers, computer boxes and other “junk” (as he lovingly calls his creations) as well as re-tooling the ones he brought back from his globetrotting adventures that have included personal encounters with local musicians in India, Morocco, Mali, Greece and elsewhere.

Ana, who also nurtures a very personal relationship with music paraphernalia, adds: “There is a different attitude at play if you make an instrument yourself. It already tells you a story. If you buy it, it takes longer to get to know it, to tame it.”

In the little village of Lesno Brdo, tucked in the rolling hills ten kilometers south of Ljubljana, Ana and Samo organize music performances and festivals on a farm they rent, and divide their time between music making and vegetable farming. A close connection with nature is also important to Iztok who now resides in the capital city. “It’s a sort of a contact with the past but it also has its own life in the present.”

Fearlessly textured sonic landscapes – both linked to and unbound by – the past and present, geography and tradition, the real and imagined. Hypnotic, otherworldly and epic.

Širom’s music moves like the restless waters of their homeland. No matter how hushed or slow it may seem, it is never ever standing still.

Bandcamp Daily  your guide to the world of Bandcamp

Featuring interviews with the mighty Haitus Kaiyote and genre-busting L'Rain.