A Universe that Roasts Blossoms for a Horse 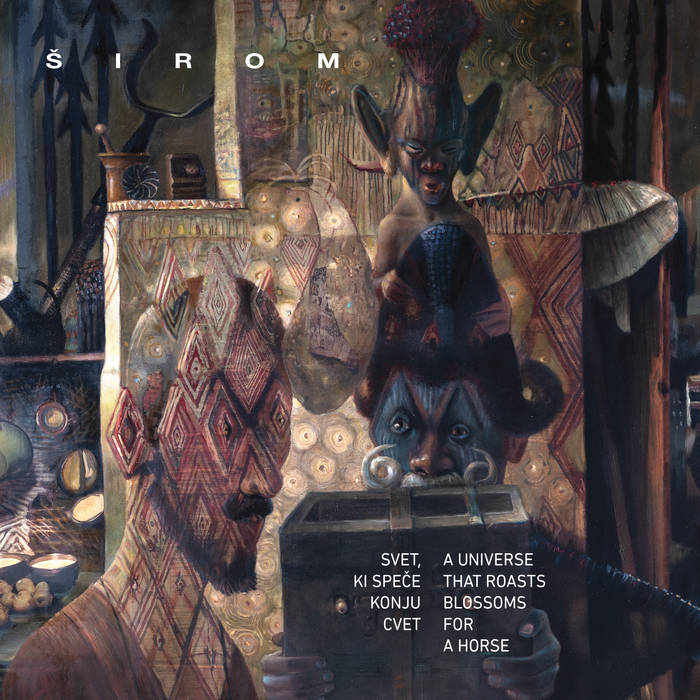 Carsten Pieper Completely uncategorizable music from Slovenia, thus the more fascinating... Ethno-avantgarde something. The songs take their time and should be given it (and your full attention).

Due to my own ineptitude I didn't succeed in applying the bonus code, but the music is well worth the extra money ;-) Favorite track: Same as the One She Hardly Remembered.

There’s a sequence in Memoryscapes, a lovely short film, in which Širom set about fashioning music from a pile of pots, pans, saucepan lids and empty cans of supermarket lager on the kitchen table. It’s the band in microcosm: cracked, insistent beats, rhythm chasing rhythm, a deadly serious playfulness, and the intimacy of close friendship undercut by the sense of emergency of a flashing torch. Širom are all about the head and the hand, and the dark that always pushes against the light.

We’re around another kitchen table now, and the three members of the band – Ana Kravanja, Samo Kutin and Iztok Koren, in any order you like for this is a collective endeavour – are gently fending off any question that attempts to reduce their music to type. It’s not the first time they’ve had to suffer a conversation like this since their highly acclaimed second record, I Can Be A Clay Snapper, became one of tak:til’s first releases two years ago. ‘Imaginary folk’ is Samo’s preferred description, but the word ‘preferred’ is doing some heavy lifting here. You get the sense that the band don’t much care for labels. ‘It’s also good not to know everything,’ he says. ‘We don’t want to play something that sounds like it already exists.’ (Although fans of psych, outernational field recordings, folk horror, Don Cherry’s Organic Music Society, Rileyesque minimalism or mutant country might find a home, however fleeting, in Širom’s world.)

The band are more than happy, however, to bust two myths that seem to have grown up in the last couple of years. First, this is not Slovenian traditional (or traditional Slovenian) music. It might be produced from and by each of the three landscapes in which the band were raised – the Karst, the hills of Tolmin, the eastern plains of Prekmurje – but unpicking what came from where is an impossible endeavour, as Iztok points out: ‘We know the impact of the landscapes that have influenced us could be measured, but practically it’s impossible because there are too many variables. Nevertheless, it is important that we ask ourselves this question, because it is like a compass – it gives you direction, but it doesn’t say what you will find at the end.’

That quest, which starts with every song, and feels renewed each time it’s played and listened to, leads us to the second misconception: that Širom are an improvisational band. For sure, improvisation is an indispensable part of the initial songwriting process; but it’s an expression of their collective manner of working rather than any musical statement per se. These are precisely crafted songs, each one months in the making, in preparation for the time when the mics are switched on and they can finally achieve what they need to without resorting to overdubs of any kind. Keen-eared listeners will hear a continuation of the last song on Clay Snapper in the first song of the new record: a nod, perhaps, to the fact that they began work on the new record immediately after the last.

But whatever has gone into the music, from the band’s home landscapes to their previous and in some cases still current musical projects (classical, hardcore, flatlands post-rock), Širom sound like no one else – and that’s the point: ‘When we make music, it’s like making a new world,’ says Samo. The world of the new record – A Universe that Roasts Blossoms for a Horse – is indeed subtly different to that of the last: the viola still teases and tugs at the percussion (or is it the other way round?) and the banjo still periodically tries to break free and set up on its own, but there’s a glimpse of electricity (that rarest of beasts in the Širom catalogue) in ‘A Pulse Expels Its Brothers and Sisters’, courtesy of Samo’s homemade tampura brač, more vocals, albeit as unsettling as ever, and a new sense of spaces being prised open. What remains is that strange and unmistakeable Širom groove, which exists to be broken down (as Ana suggests), and the dark joy that runs through all their work.

Bandcamp Daily  your guide to the world of Bandcamp

Featuring interviews with the mighty Haitus Kaiyote and genre-busting L'Rain.